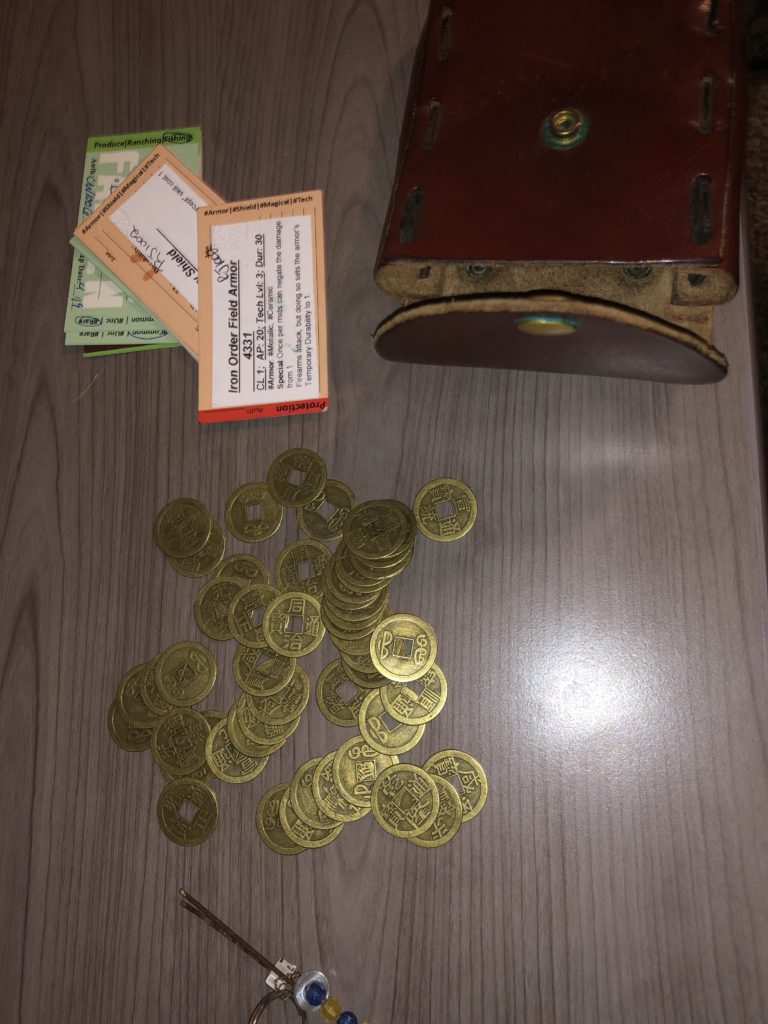 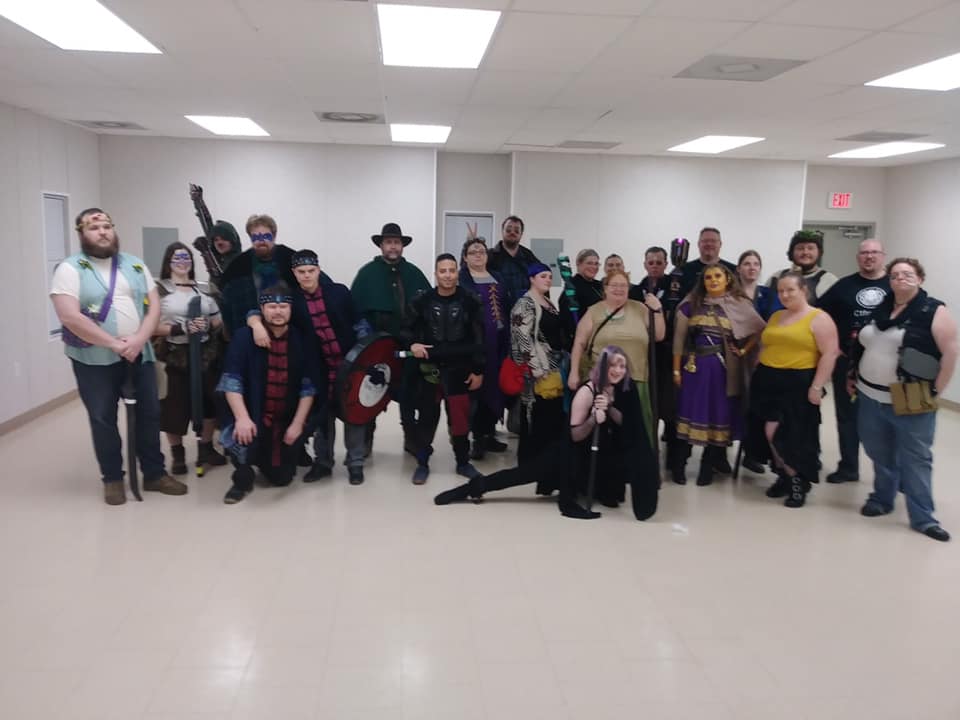 Summary: Rift Fallen is a monthly, early access, boffer LARP. At the time of this review there have been two games; the beta and the first build. The game is heavily based on H.P Lovecraft's Cthulhu Mythos with many fantasy elements.

The Advertised Plot: One fateful day the humans of earth were teleported to an alternate dimension called: The Outland. The Outland is an extremely magical land with many magical pillars placed by a friendly Elder God that allow dead humans to be resurrected after death named Noden Signs. After humans continued life as they could they realized their children the night of their birth had developed strange features (all dependant on the dominant Elder God that month). They began to call them Auspices. The land has dangerous areas called Rifts for you to venture to that are not protected by Noden Signs, usually told to have the best treasure and the activity was named; Rift Running. You play as an Auspice among a group who seem somewhat nomadic as the in-game location is expected to change every game or few.

How The Weekends Went: I backed the project on Kickstarter so I went in with a few extra items which helped me start out. I played as Jeice Ripley, on the first weekend an unarmed fighter, and the second, a sword and shield tank. The mechanics of the game have many similarities to other boffer LARPs, but have a lot of unique additions and perspectives on many of the skills and rules. both of which had skills unique to their playstyles which I enjoyed. Along the games we came across various issues which the staff were extremely friendly and helped us resolve including: game questions, rule calls, situational compensation, and just constructive feedback in general.

Onto the events of the weekends! Weekend one, the beta, we were told was a glimpse into the future (which we may see impact the plot later on). It started with a giant storm on the surface and the group was forced to retreat into the caves and abandoned shafts below the ground. We were taken through multiple narrow, monster filled caves with gemstones aligned on the walls (mattress-built caves with green Christmas lights through them symbolizing gems). In the caves were cultist and troll fights, which were very hard to show our numbers due to how narrow the playing field was which added some realism to the "going through a cave" mechanic. After that we were settled into Ghoul Town, inhabited mainly by whispering, technologically advanced ghouls. Ghoul Town was pretty big so we got to ride in one of their vehicles to get from one place to another (a golf cart). In the game's downtime, myself and a few friends found a fun exploit with the perform skill where we could all perform and benefit from each other's performance, which to say the least was hilarious. Many other small non-plot related things happened such as: going to a cliff to collect mushrooms and ghoul merchants coming into town to sell wares. Saturday night was the climax of the first weekend. We got to go zip-lining into a laser light show representing a Rift. This was the first ever Rift Run of the game. We then were taken to an area that would lead back to a safe surface land free of the storm, but we had to go through one last cave, and oh boy was it hectic. We had one player hold a saw and cut through stone walls to get from area to area all the while monsters had to be fended off and to not get near him while he cut. We eventually fought a robotic mini-boss which took quite a while to figure out what to do as he wasn't taking damage, but it added a humbling experience reminding us that we are still humans. Eventually we made it to the final wall, which after being cut lead us to the final boss of the weekend. The production value for this scene was probably the best I had seen for a monthly LARP, they had used a market tent, lasers, a speaker, and black-suited NPCs with tentacle props. This fight was extremely fun we had multiple people drop to bleed-out and had to be healed by our group surgeons during the fight. Those who died were turned against us until the thing was finally killed. I ended up running straight into it's throat pseudo-heroically trying to kill it with some poison I had obtained from an Immortal being named "Simal Gal". It died about a minute later, I never really found out if it was because of the poison or not, but it was fun regardless. The death scenes weren't anything special, but it was the beta and they had put a lot of effort into the modules they ran. Sunday was just debriefing and we had to get back before it so we took our clean up shift and left after the final module. Our clean up shift was to deconstruct one of the mattress caves, we had a lot of fun in the process.

Weekend two, the first build of the game, had more people both on staff and in-game. I had switched to sword and shield this time around and was a lot more front-ready, so I got to experience a bit more combat. One of the issues I had with the first weekend was there was no side content, which I talked to staff about and they had planned some, but did not have enough players for. That was fixed dramatically in the second weekend, many requested and random side modules came out and delivered a lot of extra content, which frankly is my part of a LARP as I feel like a player can have more flexibility and influence on the end result of a side module, and that is also add some funny stories for those who did not attend them. The plot started out in the past (the first game being a faint glimpse into the future). We used a different part of the camp for the second weekend which I thought cemented the idea of being in a different location. The plot main plot was broken into smaller arcs than the first weekend, which was pretty interesting for people who didn't want to be at every major module. It started with the mayor immediately sending us into a Rift to go mine some ore for him for money. We got to the Rift with the ore and it was being guarded by some robotic cultists that needed it for their "research". It was pretty funny seeing people trying to reason with a person just saying "Does not compute, leave" to every question. A few dead robots later we got the ore and a small egg that we were not informed about. It turns out later to be of a demi-god race and the town was presented the option to sell it to Simak Gal, the creature from before, or give it to one of the race to avoid their wrath. In the end we decided to give it back, everyone in the town being afraid of demi-divine intervention I guess! It took the egg back and appointed a few town members as ambassadors between the species, probably going to tie in with plot in the future. Later that night we were attacked by wendigos, a bunch of man-eating monsters. They had shut the breakers off to our cabins and night-raided us, a few people were genuinely scared! Again, we left before debriefing and did our clean up duty, which was way easier than before, thank Cthulhu! We had a few friends stay and said they had content on Sunday that we missed and it was really good, so we plan to stay next Sunday.

In closing, Rift Fallen is a new, very unique take of boffer LARPing and Cthulhu Mythos in general. Every time I had any piece of feedback or constructive criticism it was instantly heard, and later implemented into the game. I plan to continue going to Rift Fallen and anyone in the area should give it a try!