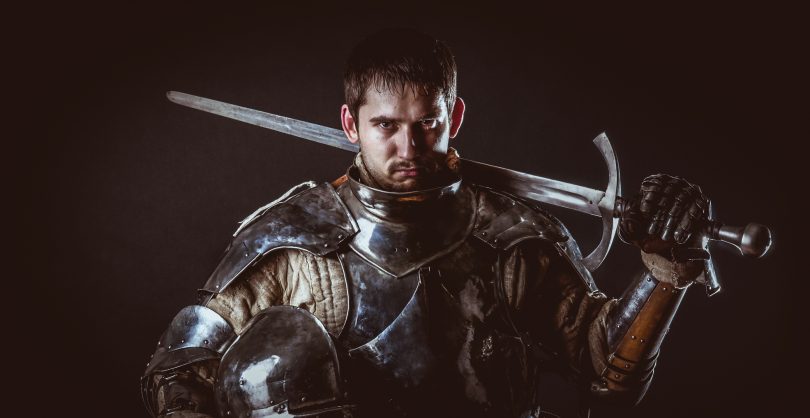 Introduction: Boffer Larps mostly focus on heavy mechanics and rulesets that players follow to initiate in-game advancements and actions. The smallest thing like eating a meal has an effect on your character's status. In these games when monsters attack the city or players go on daring adventures there is always a frontline of warriors to protects the backline and non-combats. These are our warriors! How do we build one of these in a boffer Larp effectively? Let's find out!

Weapon Choice: Warriors tend to have the best options in boffer Larps when it comes to the physical selection of weapons. Depending on the rules of the game, warriors typically will be found using a medium sword and a shield, two small weapons, a great weapon that requires two hands, or some more uncommon variants that can range to maces.lances. and even unarmed! Choice of weapon will heavily influence your in-game abilities, limitations, and playstyle so choose whatever is the most fun or fits your character the best!

Common Game Abilities: Many boffer Larps share common mechanics and are very slightly altered between them. A good example of this are abilities such as Parry. So long as you are wielding a boffer melee weapon of some kind you can not take a hit as if you did not get hit by it at all. Another good example is Dodge, usually allowing a player to not get hit by projectiles or magic thrown attacks. These common mechanical abilities are very effective and are essential  to warrior character survivability.

Status Effects: Warriors are in a fight for one of three reasons: kill, distract, or disable. Status effects in Larps help with all three of those. These are commonly named abilities such as: Trip, Sunder Weapon, Break Limb, Shield Bash, Grapple, Taunt, Intimidate, and so on . Usually doing some of the following:

Trip: Monster must use a counter ability or must lay on the ground for set amount of time.

Sunder Weapon: Weapon that is hit is either destroyed or is dealt damage toward its destruction.

Break Limb: A limb of contact with this ability is unable to be used and the monster must drop whatever is in a broken arm.

Shield Bash: Similar to Trip, but may have small changes between Larps.

Grapple: Usually allowed to players who are doing unarmed characters (wielding unarmed boffer weapons), allows players to grab onto a monster and they cannot move away from (depending on game) or attack another target besides the grappling player, and cannot escape until they use a counter ability, usually called something simple like "Break Grapple".

Taunt: Monster can only attack a player who used this ability for an amount of time

Intimidate :Monster cannot attack a player who used this ability for an amount of time

These are examples of many of the common ones to look out for that can create a very effective warrior in just about any boffer larp. Each one has different uses and can make or break a character build.

Archetyping: This is where creating your character gets interesting and customization comes into play! This is where you decide exactly what type of warrior you want to be. There are many different types of players out there and your in-game choice can depend on your physical abilities, how tall or short you are, how fast you can run, etc. Here are a few examples of archetypes you can cast your character into:

The Tank: The tank is a character who enjoys taking a beating, literally. These characters have a lot of HP (or health) investment and take a lot of hits before going down. They typically function as distractions as they can keep the monsters busy for quite a while, while the mages and archers and such can do their job. They typically take less abilities than other characters and focus more on health investment. Abilities Tanks typically take are things like Parry, Dodge, Break Grapple, and other defensive abilities. This build is especially effective when using a sword and shield or a great weapon.

The DPS: DPS typically stands for "Damager Per Second" but in Larp case can also mean "Damage Per Swing". These characters typically invest into whatever damage skill is available in the game to maximize on how much they can deal in one hit. This is especially useful with fast swinging weapons such as dual wielding or unarmed. These types of players will want to grab whatever they can to give them even more damage and abilities that will allow them to get more swings in such as: Trip, Intimidate, and Break Limb.

The Eldritch Knight: These types of characters are great for experienced players, but are also a fun challenge for anyone up to it. Wielders of sword and spell, these characters can swing hard and throw a fireball or two. The downside of course is average investment into magic and fighting and mastering none. Games vary in how magic works in them and that is up to player discretion if it is possible or worth it enough to do both. These characters usually use sword and shield to avoid investing in HP, and will dip into some damage investment and whatever mana or focus the game has implemented into it. Abilities like: Shield Bash, Dodge, and Parry are especially useful along with whatever magic the game allows.

The Power Player:  This is the type of character that invests heavily into focus or mana (pool that allows ability use) and grabs a wide group of abilities that will allow the most versatile and resistant gameplay. These characters will be able to Parry and Dodge their way out of any situation and they will, over, and over again. These players typically take whatever weapons they want as they will have stockpiled use of whatever abilities they have for their weapon of choice. Abilities they take for newer characters will start with the generally useful ones such as Parry and Dodge and will move onto more situational ones as they progress.

Summary: Building a warrior is the go to choice for players who want to get a good workout out of a Larp, and in many opinions, the best way to enjoy a boffer Larp. Remember that many things factor how you play your character. If you are going with friends what is your party missing? Does your desired costume function well in combat and look the part? In closing, have fun with whatever you do in a Larp, most Larps offer rerolls of characters at key points or for free for new players. So try something different and find a warrior build that you love!