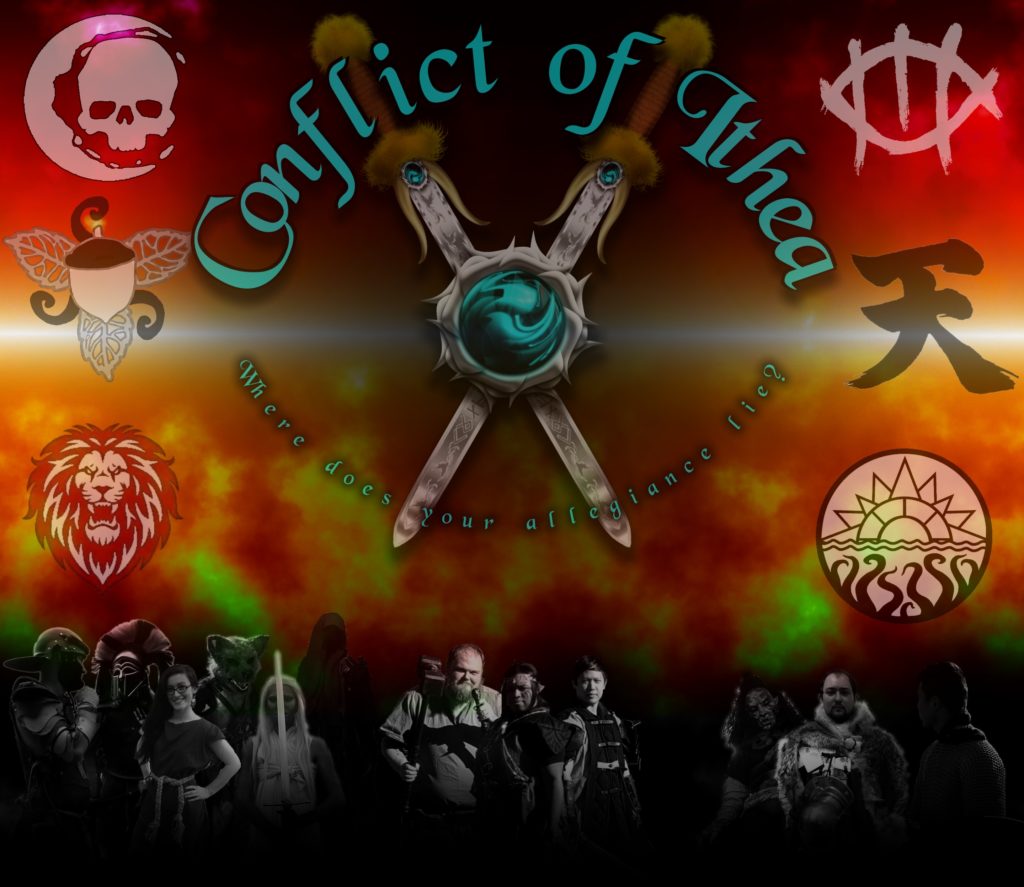 Conflict of Ithea is a high realism, full immersion, fantasy-based LARP; where there is no magic but healing. The game is kicking off its first game this April and boasts a lot of things to be excited for! Six factions warring. For glory, land, and prosperity…but which side will you choose?

The land of Ithea is no stranger to war. Conflict breaking out constantly is the norm for the realm, which began an era of constant fear and sleepless nights for all who inhabit the continent. A northerner by the name, Haston, would one day would change that, with rallying cries and only necessary war; showing even the most powerful and evil foes mercy. However, just shy of twenty years into his cause, most of the issues of the realm had seemed to be resolved under the new banner of the Albaster Kingdom.

Then on for over three hundred years would the land of Ithea know peace. Unfortunately, a few of the tyrannical gods grew bored of spectating such peace and goodwill towards fellow man. So a few of the gods even made a game of this spectacle, wagering that if the Albaster Kingdom were to… disappear… that the residents of Ithea would once again tear each other apart. However, not all gods were for this diabolical plan, but they were quickly outvoted and the gods froze the Albaster Kingdom in the very darkness that it vowed to prevent. As the gods predicted, not even days later borders closed to some and treaties broken with others; war was once running rampant across Ithea. These unfortunate events transpired what was more than a thousand years ago. The effects of those events grew into new factions with new ideals, new religions, new desires… There is much more than war. There is the Conflict of Ithea.

Of the six playable factions that have been released to view on the game Facebook Page, the first of these is the Lion’s Den. This faction is run by humanoid beasts, were-creatures, humans, Lycans, and the Demigods of the royal family of their leader, King Cyvus Vail, The Blood Lion. This faction exhibits a combination of Norse, Greek, and even Roman culture in a melting pot with beasts. They follow the religion of the Order of Malak. Those who follow Malak promote loyalty, honor, glory, courage, and respect. They wear crimson reds to signify blood that they spill for their faction.

The second released faction is the Host of Minas Urdu led by Tindomul, The Lich King. This group is primarily made up of undead, but has accrued human members that also seek glory in undeath. The members of this faction worship Zaltara, and wish to bring the realm into a permanent night. They don a sage green, which for some members is a nice match to their skin!

Next is The Silverglade, lead by the Elven Royalty of Omah Nin Artemis Stormwind the Ilyrana. This faction is most notable for being the home of most Elves, but also for homing many of the Fae kin, Satyrs, Fairies, Halflings and such. They worship the gods; ; Calin’nar the God of Fire and War, Sylvari the winged elven Goddess of Archery and the Arts; and the human that ascended to godhood, Varen. Their followers believe that they will grant them strength in both mind and body. They wear the magenta purples as a reminder of the flowers that once bloomed in their homelands.

Fourth is The Amatsu Alliance led by Maou Jin. It is an Asian themed faction that is home to the Yokai, a spiritual race with glyphs and markings on their body. Humans and Oni along with the Jiang Shi, a vampire-like race that were not correctly brought to undeath take up arms in this unique faction. Their religion is quite unique as well, believing the Sun, Moon, Sea, and Storms will select chosen individuals to rule. Their color is the yellows of their sigil, the kanji meaning “Heavenly Sky”.

Fifth is The Nartum-Kaal. Filled with Orcs, Goblins, and slave humans; they form war-bands and exhibit strength above all else. They are ruled by their Orcish Chieftain, Droog, and vow conquest by any means necessary. They are not shy about their number of dark rituals to increase their power but vow no allegiance to one god or religion. They wear greys like their ashen skin.

The last, and most definitely not least is The Empire of Primordia, a faction of Lizardmen, Snakemen, Salamanders, and Fish. They worship the Three Sects of the High Ones, the Deep Ones, and the Old Ones. They believe that they will attain freedom and protection from the first two, so long as they pacify the third with the sacrifice of themselves and others. They have been here for millions of years and vow to not be overcome by the weaker “warmbloods” living throughout the realm. They wear the teals like the iridescence of their reptilian scales.

With all that hype out of the way, Conflict of Ithea’s first game tickets are available for purchase for just $100 dollars! This will make you a place on the Founder’s List, and secure that price for you forever! The game will be held April 2-5 at Eastwind Castle in Trenton, South Carolina (Address: 527 Johnston Hwy, Trenton, South Carolina 29847) for about three days of full immersion action roleplay fun! If you are in the area, or looking for an amazing LARP getaway definitely come try out Conflict of Ithea! Check out the Facebook page or shoot them and e-mail if you are interested or have any questions!

6 thoughts on “Conflict of Ithea”