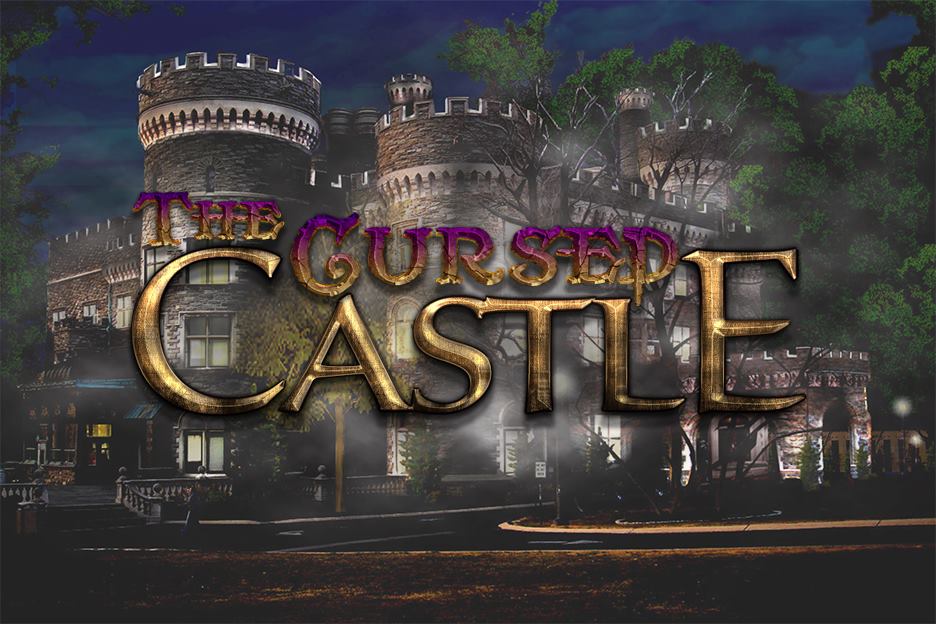 Summary: The Cursed Castle: Wizardry Challenge was a whirlwind of a weekend full of wonder and amazement. As the first run of any event, there were definitely some hiccups, but overall the event was amazingly fun and left my crew scheming for the next Game Theatre adventure.

A corrupted sorcerer, Alastair, had attempted to break a curse on a castle that became known as the Cursed Castle. When he failed, he became its protector (notably he was a weredragon).

New graduates from magic schools and legendary characters from the past were to be recruited into magical factions with the goal of breaking the curse and protecting the world from the monsters it released.

Collectors were supposed to come and take the best of people, and were referred to in a boogy-man like vibe.

How the weekend went:

I had purchased a legendary package for my favorite wizard of all time - Merlin! As an avid TA Barron fan, I wanted to play a younger version of this mythical being. I came in the company of Rumplestiltskin, and Percival (who was part of a cult that formed after Merlin had sealed himself off from mankind many years ago).

I enjoy arriving a day early to make sure that everything is prepared for the next day. In addition, it gives a little extra time to get to know the other players out of game. The hotel is nice, and the breakfast is pretty amazing (biscuits and gravy and Cinnabons for example!).

When it was time for the event to start, we started out of game in the lobby and had dinner. We introduced ourselves with vague details - as most Game Theatre games are based on secrecy and domination, we weren't sure if people were going to be able to use our true names against us, or what their intentions were. Luckily, being Merlin bought me a little bit of trust and instant notoriety.

We started out in a dread based game with our Circles. A portal had opened up and we needed to close it - this was to be ourselves at full power. It was awesome, and we started seeing everyone's gifts come to light. We were siphoned off two by two and taken to a room where we would do a test to see what kind of magics we could use. As Merlin I fully expected to be able to do everything, but alas there was one type I could not do. This was a neat feature that was never really used again. Allegedly, normal magic (the kind you could make up on the fly) would not work in the Castle, so you had to use this ancient primal magic that would - or collect magic scrolls that let you do other things. Cool premise, right?!

Then this group called "The Watchers" came in and swooped our final victory. It was infuriating to the different groups. And every time we were close to finishing, this guy called Goose would show up like Indiana Jones and save the day. That was infuriating a lot of the other characters, and leading to mistrust. So, when he came to officially recruit, everyone was a little skeptical.

We did a potions class where we mixed our own drink - and that was pretty neat! As the ice would hit the drink it would 'explode' a little bit. Of course Merlin kept the ice out just a few seconds to test a theory, and his drink still exploded!

The next morning, Goose came to recruit while a true and false debriefing was going on. He offered resources if you signed his book - this meant you had to sign it in blood and it forced you to scream.

We weren't in the castle yet, so I casted a silence spell and signed the book. The reason why? I wanted to have fun. Join an untrusted faction. And a passing GM said "make mistakes and have fun" - the best advice I got all weekend.

They also went over a card game that allowed wizards to participate in tournaments. Kind of like it's own card game, it was really neat and one of the coolest features of the game overall. I actually loved this so much as it allowed combat to be handled in game and provided something to do in downtimes. As your character journeyed throughout the weekend, they could pick up additional magics. For example: 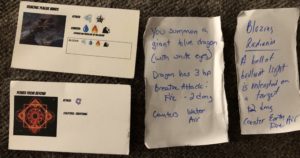 I gained "Demonic Plague Winds" after joining the Watchers. At some point, they turned 'potentially' demonic. This card was given to me for keeping with the Watchers even when the going went bad.

I learned "Power from Beyond" while in a mission to remove a curse. A witch had the knowledge to end the curse and instead chose to attack and nearly kill my group. As Merlin, I was hungry for knowledge and put my hand on her head to suck out all the knowledge of how to end the curse... and steal some of her battle magic.

The Dragon summoning spell was my reward for coming in second place at the Battle Magic Tournament. Only the Prince of Hell could defeat Merlin - and just barely. While he ended up becoming the Caretaker of the house, Merlin was freed up to travel the world.

The Blazing Radiance spell was when I spent 150 years in the Fae realm and became the savior of the fairies. I attempted to empty a pond of tears, protect fairies from being turned into a magical drug, and quell rebellions - all while learning their magic!

As you can see, each spell I learned was part of my journey - though it didn't work this way for everyone. I had to ask and incorporate my character's story in a way that incorporated Battle Magic. Some people preferred general goodwill connections, while others dealt in foreboding favors.

My best buddies in game were a singer who lost her voice, Mother Earth, Rumplestiltskin, Percival, Gandalf, Goose, Hazel (who came perfectly out of an episode of the Magicians) and Queen Mab. We plotted, saved the world, and worked together in missions and so much more.

There were several points when it came down to us as the players to align ourselves how we wanted - was our character good, neutral, or bad. What goal did we have? Where you devoted your time and focus, you could see your story grow.

As a first event of its type, I left wanting more in an extremely positive way. Another Game Theatre event for sure, but definitely another Cursed Castle. The players were respectful of an a consent based system, and in a world full of magic didn't deem themselves a god in any sense. Everyone had their strengths/weaknesses and were careful not to cross the boundaries of being too overpowered.

I find myself eagerly awaiting the next Game Theatre event - Dragon Thrones 4. 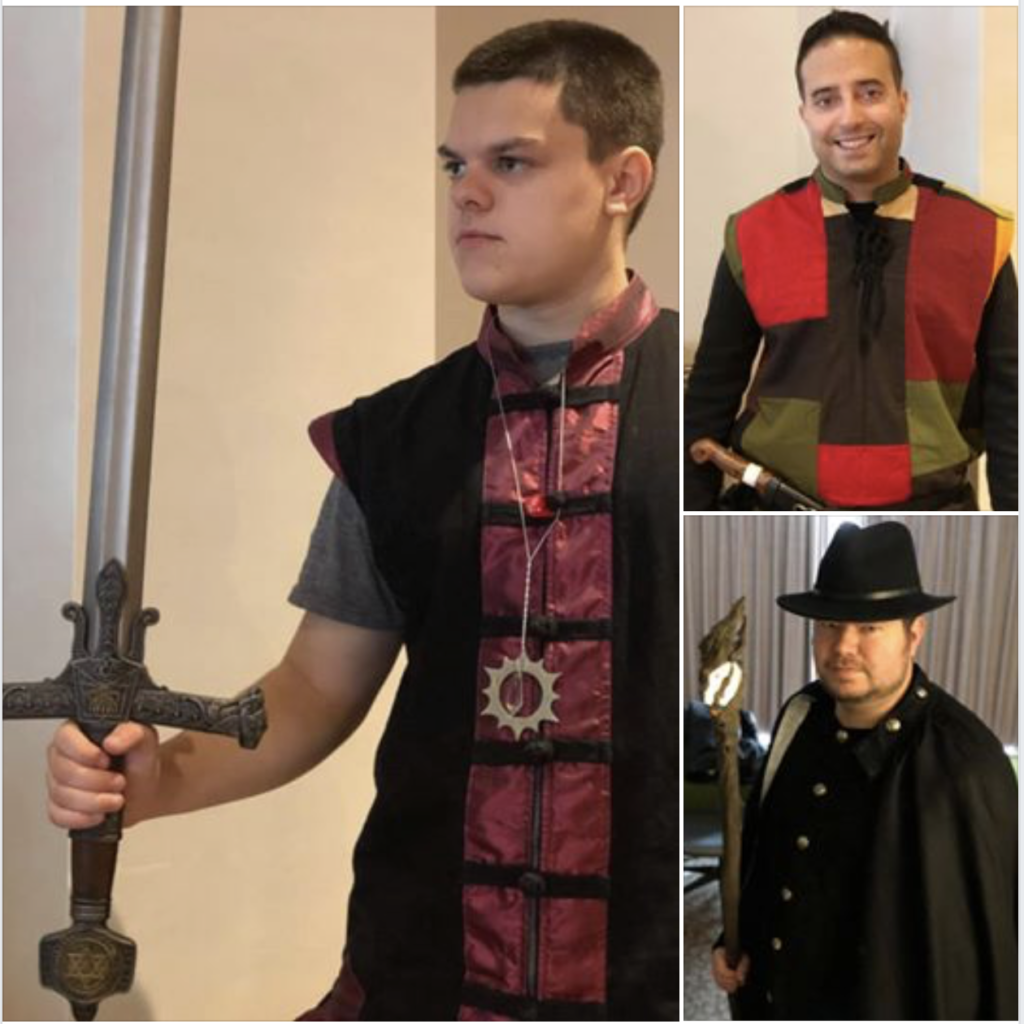 Percival the Loyal, Rumple, and Merlin!