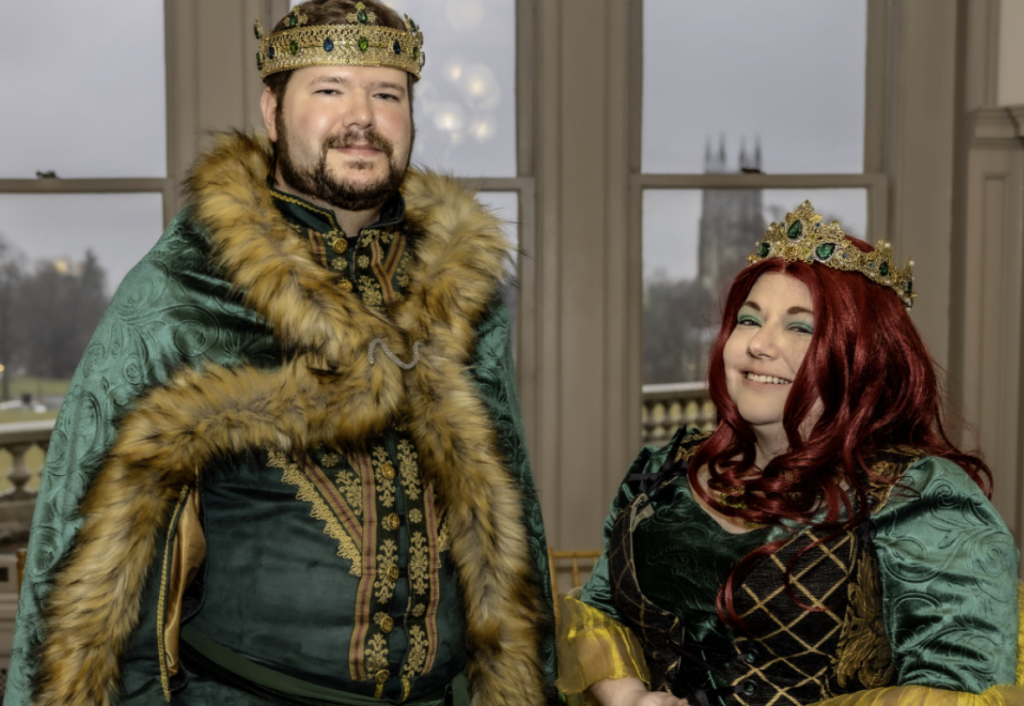 Dragon Thrones: School of Whispers took place February 4-6th, 2022 with an optional RPG focused day on February 3rd. The event took place in Philadelphia, at Bryn Athyn and the Cairnwood Estate. The venues were incredibly beautiful and a 45 minute ride from the Philadelphia airport.

Because of recent flight delays, unknown weather conditions, and late arrivals for flights – I opted to fly in the night before the first day of the event. It was easy to add on a night at the Springhill Suites, the host hotel. The rooms were comfortable and appropriate, the area was safe and food options were plentiful. The hotel lobby doubled as a late night area where players would hang out and talk out of game.

At the last game in July 2021, House Ardmore (my Kingdom) had won the Ascension, which was a battle amongst the kingdoms to earn the Golden Dragon’s favor. Because of this, the event was decided to be held in Ardmore where players would study under our illustrious School of Whispers.

At the game, I played Ardmore’s folk hero- the Fang. The Fang only appears in the Tranquility, which is the 30 years between Ascensions. Spoiler: The Fang is the King/Queen of Ardmore, wearing a magical medallion to conceal their identity. Because of this, the Fang is considered to be an immortal being who protects those of House Ardmore.

The RPG Add On

An optional addition to the experience, the Thursday add on was very memorable. There were a handful of friends I was meeting, and the game runners strategically placed us in the same group together. This attention to detail really helped make the experience awesome – as we were tasked with looking into an archeologist’s concerns at an excavation site.

Soon, it became known to us that the archeologist’s daughter was abducted, and there were cultists who were trying to summon a monster from another plane. There were several bards in my group and a rogue – leaving me as the tanky Paladin who would throw his life on the line to save any of his own. In the final boss battle, this proved his undoing – as the Fang was swallowed whole and feasted on by parasites. No worries though… somewhere deep in his stomach the power of the Dragon Throne of Ardmore stirred… preventing his death. When the beast was slain, a simple potion of healing surprisingly brought him back to consciousness.

For me, having this day to get into character was a great experience. With Covid, my ability to ‘people’ has been incredibly diminished – and so having a soft introduction to everyone again was a really great start. The food was great, the themed mead and other alcohol wonderful, and all was complemented by good company and a great DM.

On Friday night, the cultists were in full force. Not just in the theater of the mind, but in person. Their goal? To obtain the Gems of Death. A gift for the winning house of the Ascension, from the Golden Dragon King himself. Though there was much debate on the nature of the gift – blessing or curse–the items were foolishly put on display for everyone to see by the King (myself, at the direction of the event runners). Then, the guards escorted the King out for his safety… enter the Fang.

There were no High Rulers present at this event outside this appearance. It was strategic so that everyone was on an equal level. At the Ascension, there are several different levels of players, known as High Rulers and Golden Court Members (High Rulers who have previously won during the summer).

My bride-to-be, the future Queen of Ardmore, was entirely unprepared for everything that would unfold that evening after the King quickly left her on her own. Entirely new to her role, having little power and even less respect as a transplant from another kingdom, the soiree swiftly turned to (orchestrated) chaos. Amongst the joys of a beautiful ball, cultists were infiltrating and stealing the Gems of Power. Once taken, the Gems would possess the holder and force them to kill another. This left somewhere around 15 people ‘dead’ in one night. In Dragon Thrones, death is just a state of existence next to being alive, and with some good roleplay – players were brought back to life.

The King, in his infinite wisdom, had hired prisoners who were to serve under a Helfarian-turned-Ardmorian ranger. This Warden had a no-nonsense attitude, and served admirably until his eventually permanent death.

As the Fang, I helped rescue several members of the Serpent Court when a fire exploded, and even helped bind the Gems of Death together to render them harmless to touch.

At the end of the night, we had succeeded in our endeavors. I had met with foreign dignitaries, participated in multiple court meetings, played in a game where I sipped a strange substance and assumed an identity in an Ardmorian fairy tale, and so much more. What an incredible evening!

Saturday, the School of Whispers

On Saturday, we went to an incredible chapel with stained glass windows, incredible art from the 1700s, and a giant “A” above the gateway. Here, we entered the School of Whispers. As a way of giving back to the rest of the world, Ardmore had agreed to teach dignitaries some of its ways.

All in all, I had an incredible time. The days leading up to the event were fun in preparing garb and making plans with others. Seeing my friends in person, and having this immersive experience with them is nothing short of epic.

With Dragon Thrones: Ascension, taking place in July of 2022 – House Ardmore has already started to prepare its path to victory for the next competition.

For additional information on this next game, check out DragonThronesGame.com or feel free to reach out to us here at LARPed.com!