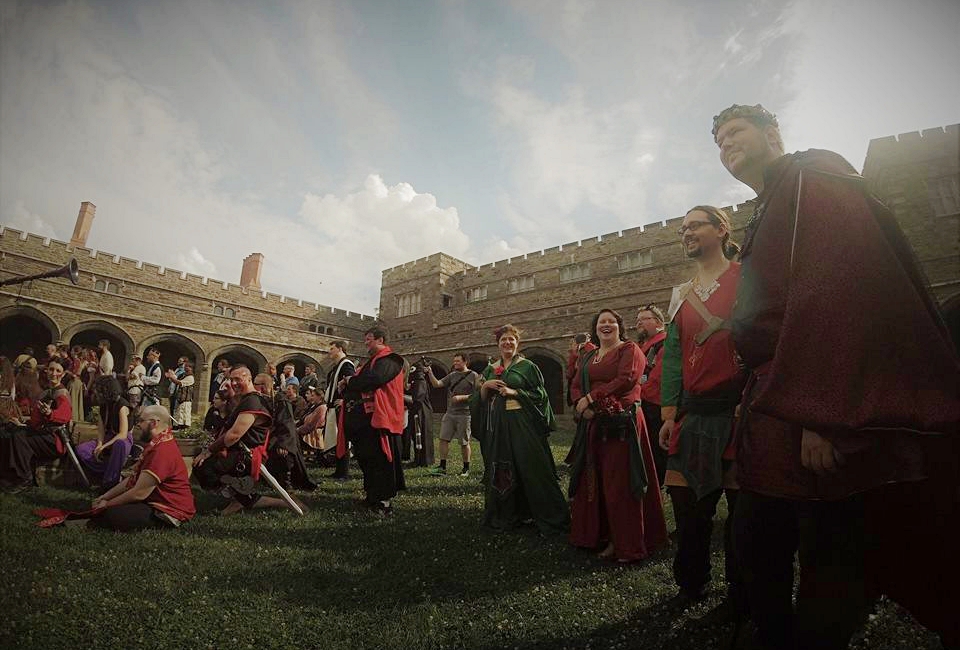 This was the first year of Dragon Thrones, a self-proclaimed “Fantasy LARP and Fantasy Gaming Experience”. It was a great experience that I traveled 13 hours to get to in a small car. So much of the fun was preparing for it in advance, custom making the garb and scheming behind the scenes.

The premise for Dragon Thrones, is that royal families are gathering with the draconians (half human / half dragon people). A summit has been called to unite the houses in a time of catastrophe. Each person who attended was given personal objectives, and their family was given main objectives. Personal objectives were things like, “Set up arranged marriages for your daughter.” while Kingdom objectives were things like “Take over the Ardmore Citadel and claim their dragon throne.”

Within a house, you could have people with conflicting personal objectives, based on how their character felt about specific topics. This could be things like; how they feel about other houses, their own king, or controversial subjects like peace with the draconians.

Most character stories were given out around a week in advance. They were well-written and told you a little about your history and point of view. These also described how you see the other people in your house (you love your daughter, but are very cautious around the spymaster.)

As far as roles go, there were many things that went into the process. The first is that you can pay to play your position. The high ruler package could land you ownership over your house (or you could be sharing it with someone else). The Lord and Lady package was beneath this, and then the Hero/Adventurer packages. Pretty much, your position was based off of which package you purchased.

As a King, my weekend was spent answering thousands of questions beginning with “Your Majesty…”‘. To others, it was spying and learning information – or running magical ritual after ritual. For those who were negotiating treaties, it was running to other war rooms and asking what they wanted.

The game was immersive because of the self-driven family aspect. It was a family or guild against the outside world, and most groups played to win. There was a large amount of alcohol, and we shared some find memories of nearly laughing out of our seats at the banquet.

My fondest memory was the final megagame round, which functioned like a giant game of Risk, where the other houses approached us. One Helfarian got on his knees and begged forgiveness from us. One Lancaster approached and asked where our troops were – and with one swift action we moved our troops to their Citadel. A General from Wyndon stomped and asked us if we were going to continue our ‘dance’ – to which I responded that yes, we were.

I think most of the people who attended are a little nervous about what will happen at Dragon Thrones 2. I’m definitely looking forward to attending again!

Immersive. Something always going on. Pay to play packages. Costuming was high end. All inclusive.

First year hiccups. Hot weather and heavy garb. Site is not exclusive to the event. Not enough time to do everything (that’s kind of a Pro!)