Eldritch is a limited run, medieval, low-fantasy LARP that I usually describe as "Game of Thrones" meets "Call of Cthulhu".

My favorite thing about Eldritch is that it has a plan.  The game runners decided the game would take place over 12 events in 3 years, and then the story would be finished.  They plotted out the entire story arc and wrote hundreds of pages of background material (ranging from history to cosmology).  The result is that the setting feels very rich (every player has 20 pages or so of cultural information from their home region to draw on in making their backstory), and everything that happens at events is full of foreshadowing and clues about what is to come.  The narrative pacing is also exciting, because every game they have to tell 1/12th of their entire story; the game doesn't have the 'locked in time' feeling that some LARPs suffer from. It's like getting to be a character in a well-written serial like Babylon 5, Deadwood, or Avatar: the Last Airbender.

What is that story, you ask?  Good question! One high level story is that there are eight great feudal houses of the Kingdom of Arnesse, and each of those houses has sent a lord or lady and their household to colonize the newly rediscovered land of the Annwyn, (pronounced “A-noon”.)  Live games take place in a neutral port of the Annwyn. Part of the LARP is the machinations of those eight houses vying for position and the story of those colonies. Of course, there are people who already live in the Annwyn, and those relationships must be navigated too.

There's a metaphysical story going on as well.  Magic has been dead for centuries, but appears to be alive in the Annwyn.  Gods were killed long ago and mythical beings have been quite rare, but they exist in the Annwyn.  (Some of which are quite dangerous!) A new faith has been on the rise, and its practitioners seem to wield supernatural power.  Colonists to the Annwyn have begun to have strange dreams. No one knows exactly what is going on, but characters are delving into these mysteries.

No matter how good the underlying writing, a LARP is nothing without its community.  One of the guiding principles of Eldritch is that the players give each other the best experience they can.  Part of onboarding players to the game is not just an introduction to the (light and elegant) rules, but also some guidance about how to look out for each other.  This ranges from embracing systems like OK Check-in, to having a safe cabin for people to take care of mental wellness, to asking players to make meta-choices to be inclusive.  I see a lot of "Yes, and...!" in people's role-play, and a game culture of plot sharing (as opposed to plot hoarding). Thanks to the rich backstory of the setting, players are constantly generating their own content: genre songs and stories, cultural festivals, symposiums and more!

The game has a relatively unique take on character vs. character conflict.  Players are expected to check in out-of-game before engaging in this kind of struggle, and try to come to an agreement about what they want the conflict to look like.  This tends to lend to measured responses instead of the sort of pre-emptive killboxing that happens in some LARPs. (Though, some players are certainly interested in glorious carnage and death!)  A second part of what I think is a good CvC design (and new player-friendly to boot) is that there is a campaign

experience level.  If you come in as a new player, or your character dies, your new character comes into the game with the same amount of XP as everyone else.

Eldritch is a beautiful game.  The player base has deeply committed to costuming and immersion, in part due to staff issuing guidelines for outfits, and being firm about requiring high quality props like latex weapons and period boots (or at least covers for shoes so they look like period boots).  The game has a strong "what you see is what you get" element, with staff pitching tents to represent encampments, lots of fake bones and blood, effigies of corpses, and cool set pieces like fireplaces and standing stones. (Though, staff has faltered once or twice on WYSIWYG.  One time a player triangulated some bellowing noises looking for a monster, and instead found just a speaker making ambient noise.) I was blown away the first time I saw a werewolf-type creature in the game... the NPC was wearing a full fur bodysuit and mask! People joke that it's sometimes hard to figure out where to get plot hooks because the NPC costumes are the same quality as PC costumes, so they don't stand out the way they sometimes can.

The games are held on weekends at Millersvlania State Park's Environmental Learning Center (near Olympia, WA).   It's a site that's small enough that it's easy to get between all of the parts easily, but large enough that everyone doesn't feel like they're in the same place living atop one another.  There are many eight-person cabins which the community decorates according to their culture of origin, guild, or house. Bathroom facilities are shared outbuildings with running water and showers.  There is a large dining building which fills the role of both tavern and a node for registering some actions with staff. This is also the home of the delicious meal plan. There is a large barn which staff regularly decorates and uses for modules.  Games are capped at about 80 players, both because that’s about what works with the site, and also to keep a consistent ratio of staff to players.

The game systems for Eldritch are minimal.  Combat has a modified hit location system. You get a few ablative "hit points" from buying ranks of toughness or wearing armor, but once they are gone when you get struck in a limb you lose use of that limb, or begin dying.  There are a handful of special calls trained warriors can make (disarm, sunder, knockdown, and a counter to those), but it's very straightforward and easy to pick up compared to the average LARP system. There are a few medical skills that let players undo damage from combat.

Beyond combat and damage, players can buy skills that get them resources and information at games, and skills that craft equipment and expendable items.  Crafting runs off discovered schematics, which once you use become locked into your character and non-transferable. (This means no one can steal it, and if you have an important schematic they probably want you to be alive.)  For skills like Tracking, Perception, and Lore staff writes dozens of little tags or sealed letters with plot information, so you can self-serve the knowledge your character is gaining wherever you find it.

One thing that is cool, or a source of frustration (depending on your perspective), are that some guilds and professions (which you can join in-game if you want, but can't start in) have secret skills.  They tell you what the mechanic for their skill is when they use it (gain an extra hit point, repair your wound faster than usual, etc.), but some people don't like not knowing how everything works up front.  Overall, I think of the rules as "just enough to make the game work, without ever getting in the way of it".

Right now I would describe the game as a beautifully dressed stage.  What I mean by that is that all of the background documents, the storyteller plots and presence, and the conflict between the noble houses sets the mood.  It's a fantastic platform, waiting for the players to bring it to life. As of this writing, two games are complete, and the players are getting deeper into understanding and portraying their characters, and the drama is getting richer.  However, for players who are looking to be "entertained by staff", the likely outcome would be disappointment. The number of encounters put out by staff is a steady trickle, some targeted (by house, guild, or previous action), and some untargeted (taking a stroll alone, eh?).  This can mean a player could go many many hours before interacting with a staff driven plot.

My impression is that staff is very responsive between games to all kinds of requests, whether it's accommodation based on ability, working to make the meal plan support a variety of diets, or experiences of game systems or game events.  I know, for example, that they have taken criticism to heart on many subjects including the infrequency of content, particularly combat, and trying to make encounters more leveraged (so that the content turns players into more content delivery).  They also have held many workshops with players to understand problems with systems or the game and improve them. When staff is firing on all cylinders, they hit well. Staff has successfully run four simultaneous modules, which is pretty impressive to me!

I love this game, and when conflicts have come up, I choose to play it over others.  My overall ranking is 4 / 5 stars, which I’d break down as follows:

5/5 for Setting and Story

If you want to check it out, there is currently room for more players, more full time NPCs (free), and more staff (free and greatly appreciated).
The game’s website is: https://www.eldritchlarp.com/
There is an active Facebook group: https://www.facebook.com/groups/eldritchlarp/

Write up by: Alexander West 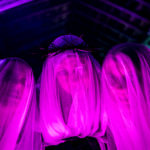 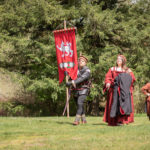 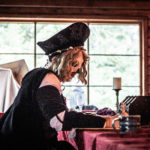 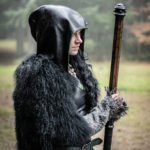 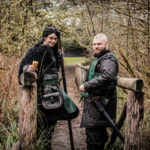 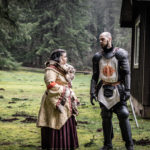 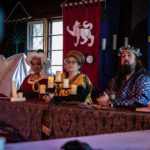 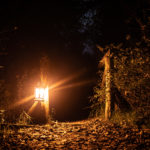 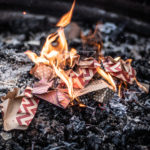 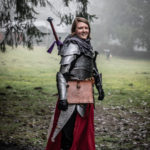 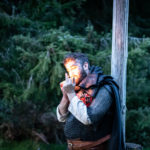 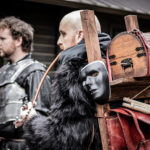