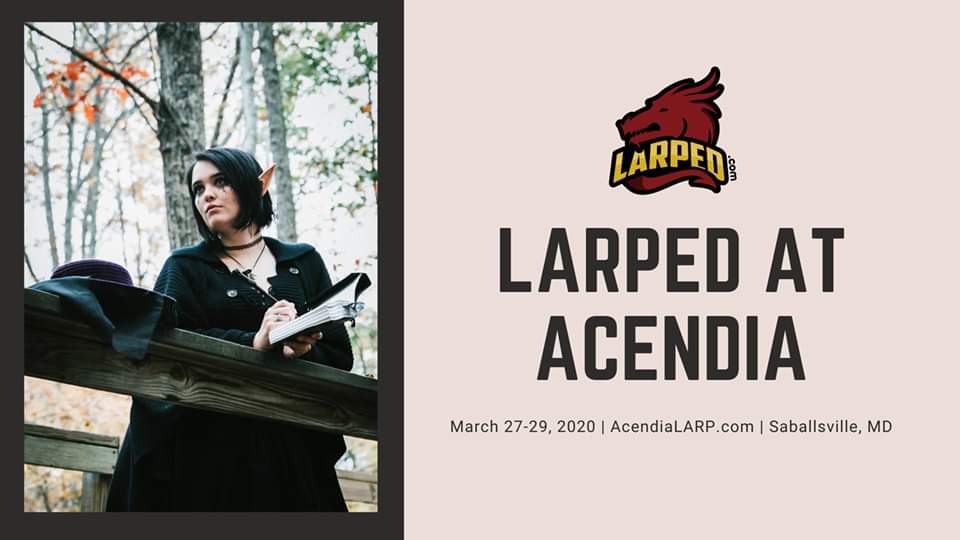 “The thunder shook the ground, lightning illuminating the landscape if but for a second. Standing feet away from, a pale face of a ghoul struck fear into the party that stood in front of it.

“It’s hungry, feed it!” shouted one of the party members.

Food came flying through the air in sacrifice, and the ghoul quickly jumped on it, devouring everything in its wake.

The Ghoul became a little less intimidating when it was full. Perhaps, it was just a little hangry. While it ate, the party made their escape, glad to live another day in a world that was only designed to kill them.

In another time, they would thank ‘god’. But these days, there are no more gods to thank.”

The scene above might sound like something you’d see in a high fantasy movie, or described in a session of the popular Dungeons and Dragon games. More notably, it describes a scene you would find in Acendia – a high fantasy LARP with chapters in Maryland and New Jersey. The game is held at camps, and for less than $100, you can enter another world where werewolves, elemental beings and constructs roam freely.

Coming into the game, it’s important to understand that the world itself is a lot like we describe Australia – everything is out to kill you. One would not walk around in the woods alone, without having a wish to die. You could get abducted, emptied of your blood, or meet a number of other horrific fates. Indeed, it’s best to travel around in a company that you can trust – which can be problematic in finding at best.

Acendia describes itself as “dark fantasy”. So if you remember the story of the three little pigs, in this world they were likely horribly dismembered before they met an untimely death. One of the base lines from the website describes a little more of what you can expect – “Knights no longer have armor that shines, and those who still have armor wear scarred and ripped metal.  Smiths willing to do the work are few and far between, and those willing to do it never do it for free.“ The world in its entirety is a little more gray – a little darker with despair and lack of hope.

Still, there are outcasts who would attempt to thrive in a world that has lost all of its gods. They form together in little societies, such as Lowtown, which is the city players call home in the Maryland Chapter.

Theft, murder, and all kinds of unspeakable acts are part of life here. A quick look at the thriving Facebook Group, shows different things that are happening in the world, such as theft from one of the world’s notable groups, the Grimskulls.

As a friendly reminder, It has come to the desk of my office that a theft has occurred. This theft happened within the home of the Grimskulls. A list has been provided of those who have been within their cave within this allotted time. I have stayed their hand at the moment. Two ingots of gold was stolen. I am asking for this money to be brought to my office. No questions asked, no need to reveal your identity.  It has been a few weeks now so I wished to make sure this is fresh in our minds

If this is not done by the next meet. Those who are on this list will go through a rather harsh and painful questioning. Then you will be at the mercy of the Grimskulls. To the point where your connection too this world will be forever lost. If you wish to avoid this. I humbly ask for its return. Again, you can drop off this money to my office anonymously and it will be returned to the Grimskulls.

You can play as a character or as a non-player character in the game. As far as players go, there are many races to choose from, from elves to orcs and many others in between. As a non-player character, you will be given different roles to play, which act as scripted characters with specific objections they aim to complete. A great example of this, would be a skeleton – which has one goal, to kill. Or you might be a merchant, trying to offload some fake wares. The number of roles you might run in a given shift at Acendia is bountiful. The benefit of being an NPC, is that all of your costuming and makeup is provided – whereas as a character, you provide it all.

Some of the staff and Marshalls at Acendia. This is a good expectation of being an NPC!

If you’re looking at attending a fun game, check out our list of upcoming games we’re attending as ‘LARPed at’ events. We will provide the companions you need to make sure you don’t wander around and die at night!

39 thoughts on “Inside the World of Acendia”