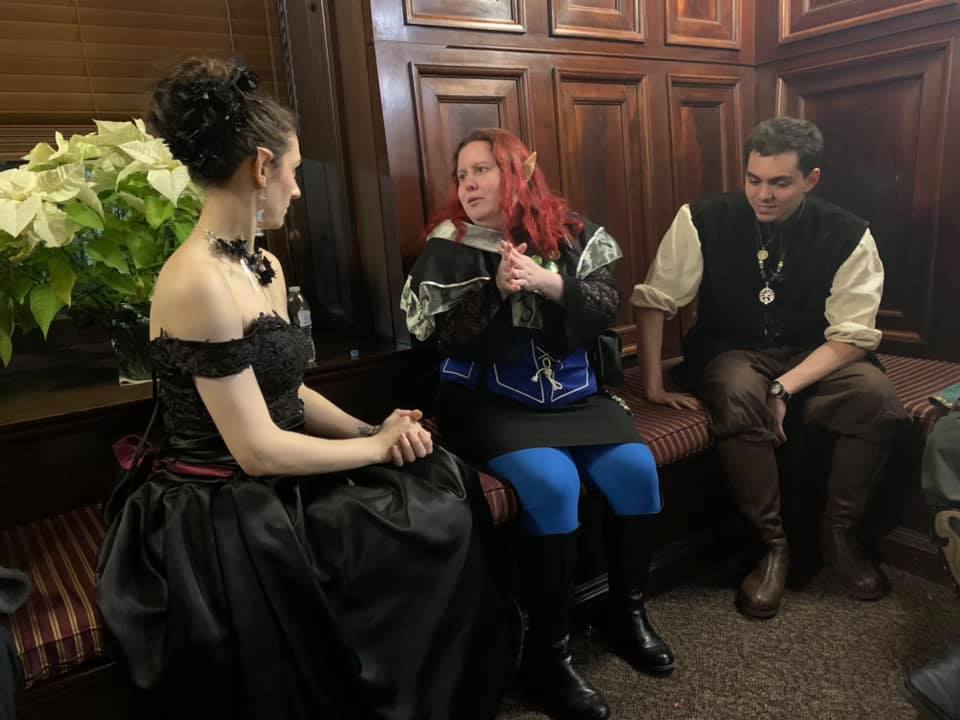 The following is an account from LARPer Tara M. Clapper. Ideas and mentions listed are their own, and are not reflective of LARPed.com’s own ideals.

It would be easy to say I started live action role playing because of a guy. In truth, attending my first larp was a culmination of events, including my need to collaboratively tell stories.

My Larp Experience Started With Storytelling

I was Lady Echo when I started a 16 year old role player. In the wild, early days of AOL, my mom required me to adopt a persona to participate in online conversations. Every stranger was danger–or a potential friend.

Starting with text-based role play, I learned the ropes and decided that I liked a third-person past narrative style. I eventually founded and ran my own popular game with over sixty regular players, Land of Free Ulster, an Irish historical text-based game. We used “TBL” or turn-based logic, which was essential freeform and low-mechanics play.

In 2006, I met some text-based role players from another group called Solorius, which was a loosely Scottish historical fantasy game. We did fun stuff together, such as explore one of my favorite cities (Boston) and head to a renaissance faire. The centerpiece of the event was an in-character banquet. What I didn’t know then was that I was larping.

By 2007, I took my renaissance faire outfit, including my very first corset, boffer larping in New Jersey. Through 2016, I explored the rich boffer culture of New Jersey, and learned about regional boffer combat larps. Eventually, I joined as a board member at LARP Alliance, a now-defunct California-based organization.

Through LARP Alliance, I was able to coordinate a filming arrangement for what came to become “Realm of LARP,” a semi-scripted series about live action gamers. I was doing marketing for Seventh Kingdom IGE and facilitated that connection.

At Seventh Kingdom, I also wrote and ran roleplay and combat modules, which got scheduled onto a big board. It was my first foray into game design, whereas on the storytelling front, I had been consistently creating stories with others online, earned a Bachelors degree, and took some Masters-level classes about fiction.

I didn’t move on from Seventh Kingdom and boffer larping until I experienced New World Magischola. A Nordic-inspired wizard school larp, NWM changed my life. While financially less attainable, I was able to see that there were larp experiences outside of boffer, compatible with my origins as a storyteller and roleplayer, and adjustable to my developing health issues.

From there, I went on to explore multiple other parlor, blockbuster, and combination larps, from Dammerung LARP to Armistice Arcane.

Larp as a Designer

I have a lot of mixed feelings about being a game master and designer. I first started creating my own larps after men in the industry had led me to believe that wasn’t really an option for me. Through the examples and encouragement of Maury Brown (Learn Larp) and Avonelle Wing (Double Exposure), I wrote down what was in my head and voila–game designer.

Larp design is a lot like being an author–you need to stay in the scene and stay aware of what’s going on.

When I lost my job at a content marketing agency in 2017, my friends asked me to run a larp. They were ready to pay and support my dream of becoming a game designer on a larger scale.

However, I was having health problems, had no health insurance, and venues and insurance were expensive. Instead, I created CHARIOT Larp, and began running it online.

The more I continue to larp and design, the more I find myself interested in thinking of myself as a storyteller. It reflects my origins, as an Irish American writer and a student of literature. Storytelling and empowerment: this describes what larp means to me.

My name is Tara Clapper, and I’ve LARPed.