Summary: Maelstrom Mansion was a one-off parlor LARP that was heavily inspired by the work of H.P Lovecraft. The game was run by very few staff, but ended up being my favorite LARP event of all time.

The Advertised Plot: In 1933, Mortimer Montgomery, the richest man in town has invited you to his home for a special party! All sorts of people and professions are gathering to celebrate an unknown event, but there is a promise of good food and fun! Once you arrive everything seems as normal as it can be you meet with many faces, old and new, before being welcomed by the host himself. Things start taking weirder and weirder turns from here as he begins to talk about incoherent and belligerent things, implying weird circumstances and events to be. From then some of the guests would be turned into monsters! It is up to you to aid your fellow brethren in either helping Montgomery in his occult goal or putting a stop to it!

How The Weekend Went:  I played as Franklin Lewis, a famous boxer who is looking for the killer of his coach who had been murdered when I refused to take a dive.

My party was able to stay in the mansion itself on the first night and then was moved to the sidehouse on the second night. Let me just say this was a beautiful venue to hold just about any event and I would love to go back to The Mansions On Fifth just to stay there again at some point. The mansion staff was especially helpful to catering to the event in any way and all of them felt like they truly enjoyed working there.

The first day started off pretty simple with all the guests having arrived and already mingling with one another while snacks were prepared for everyone. There wasn't much going on plotwise until later that night, when we were told everyone would figure out which team they were on; monster or human. Each character was also to receive a power based on their profession. I spent the day walking around in a tank top and shorts and sporting some boxing gloves, while everyone else was in formal attire. I joked multiple times about how my tank top was being a bit overdressed. I met with a few other celebrities who had known me; an actress, a baseball player, and a cop who had been investigating my coach's death. The roleplay with no plot had already been fun so I was especially excited for the game to actually begin! That night we were treated to a big greeting by Mortimer himself, getting stranger and stranger as it went on. He then had a few of his own housekeepers tied up and their throats slit to then retreat to his bedroom after repeating some occult incantations. Everyone was baffled by this and tried to get into his room, but his room was guarded heavily. Late that night we were doing night missions (narrated minigames played with playing cards or a Jenga tower). We had gone to the attic of the mansion to look for information on what was going on, which was relaxing to do something sitting down from walking all day.

The next morning everyone woke up with either a new sense of purpose, or feeling completely unchanged. I was still a human, although a monster in the ring, I had not changed. Back to the main event area, Mortimer was walking around like nothing had happened, talking to guests and playing party games. A new mechanic had been introduced; insanity and sanity crystals were being awarded/gained for doing various tasks around the mansion. Mortimer was giving out a few, some being mature such as delivering news to a person and some being as childish as racing him up the stairs. They had little closed room minigames happening called Rituals, which you needed a token that everyone had received one of to join. This added some diversity and exclusivity to everyone's experience of the game. I was lucky enough to have experienced two of them, as a friend who had to leave early had not used his. There was one that was escape room esque, where we had to create a potion to cure a dying man of a disease. It turned out to also be the cure to the monster transformation, where we promptly gave it to a friend! The other was a lot darker. There was a woman on the floor and we were being told the key to immortality was to eat her. One of us devised a plan to untie her and make a run for it and did just that. Our decisions would later impact the end of the game, which I really enjoyed having some impact on the overall story of the game. After lots of boxing stories and fun with side plot Mortimer had told everyone that the time had come. Half of the guests went to one side of the room, and the other half to the other side. Mortimer had started screaming about the release of Cthulhu and his ascension to power. The sides started their respective chants, one side to banish him, and the other to empower his arrival. Franklin Lewis had let the whole situation go to his head, claiming there was nobody stronger than he. Instead of taking a side I stood in the middle of the room and charged Cthulhu when he was summoned. Obviously enough, Franklin went insane immediately, but it was a fun laugh for everyone. In the end Cthulhu claimed the evil soul of Mortimer as a last ditch effort before being banished. The game ended there and went to debriefing, but it was one hell of an ending.

Overall, Maelstrom Mansion was just amazing in so many ways! The venue was a perfect pick for the event, with so little game staff they were able to do so much and entertain so many people, and the food was great too. It makes me sad that it was a one time event because I would definitely attend a part two! 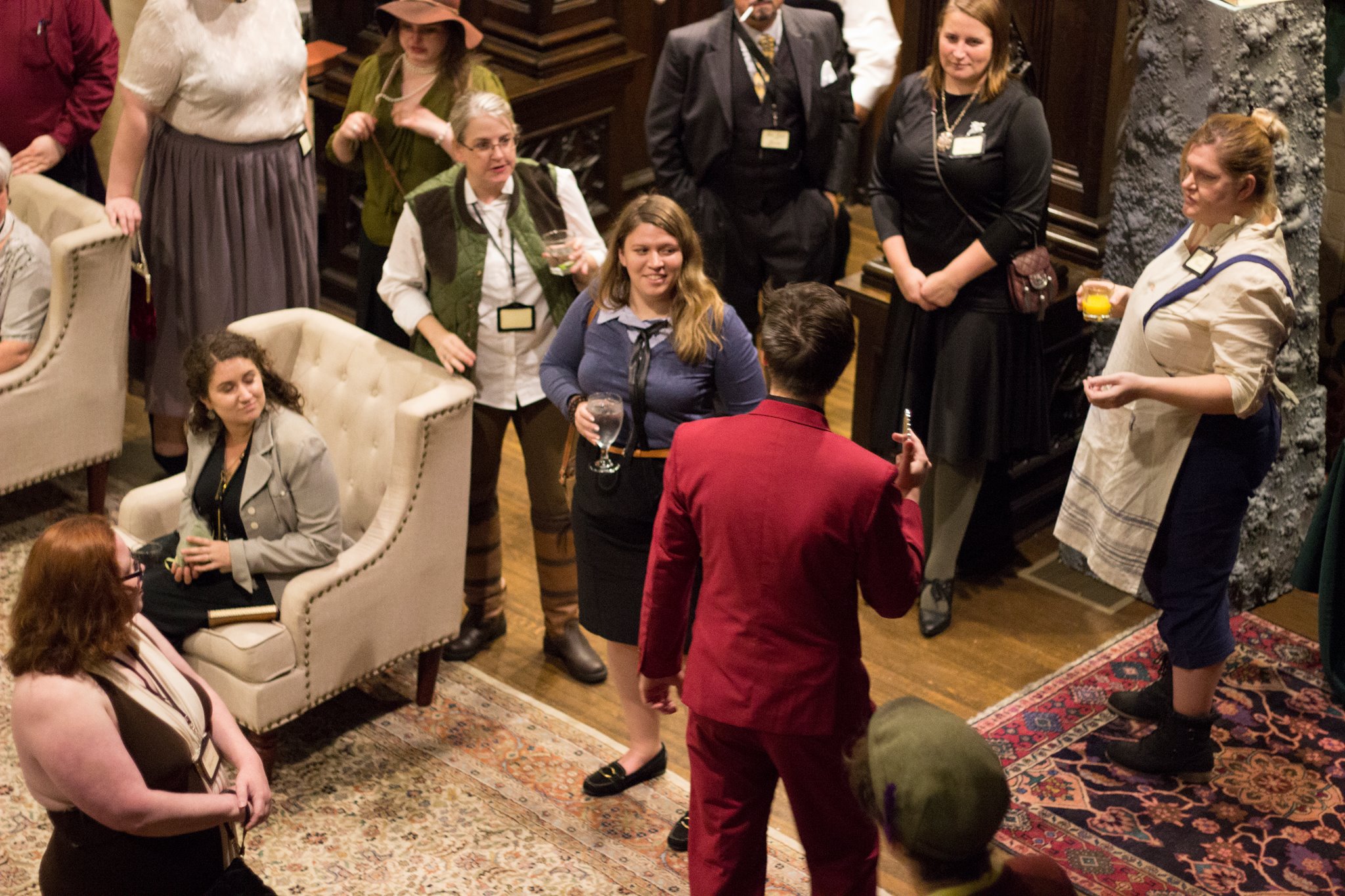 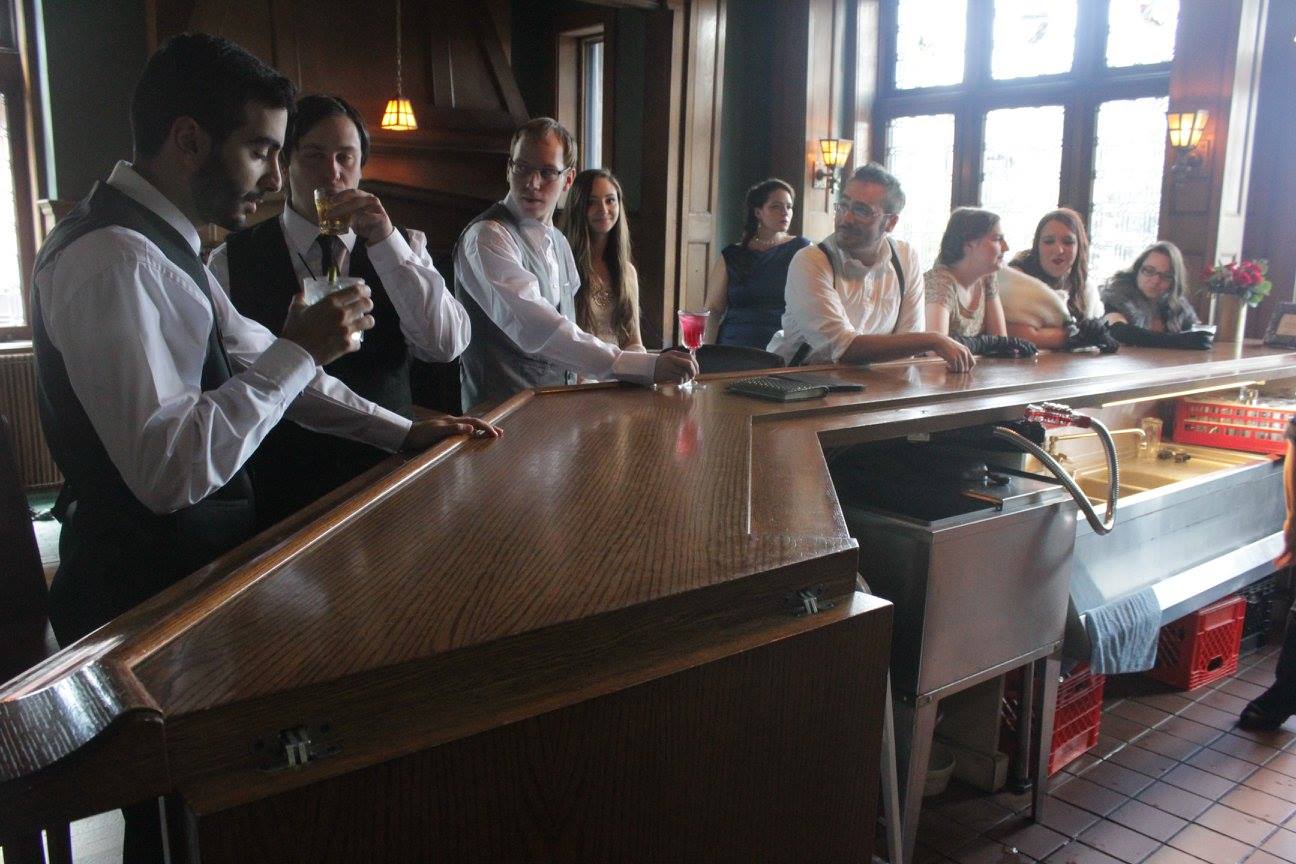 One thought on “Maelstrom Mansion”