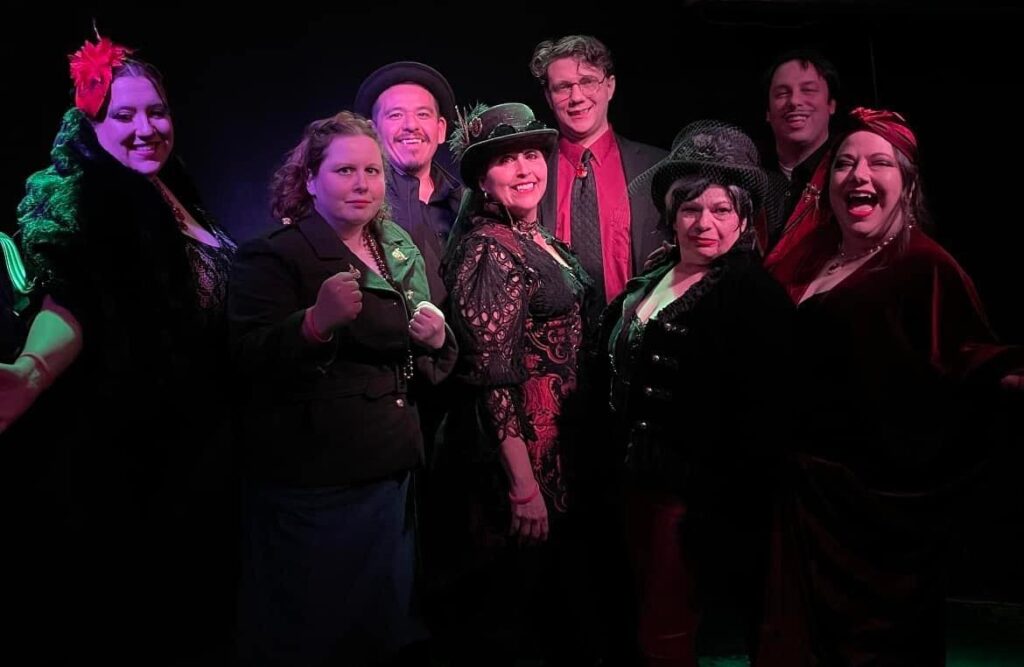 Details of the Vampire LARP in New Orleans

Saturnalia ran November 12, 2022 in the French Quarter of New Orleans. It was a joint immersive experience run by By Night Studios and Reverie Studios.

The main premise of Saturnalia is a night of rebirth and change. During this time, vampires from all over come together to celebrate. This one night of the year, the hierarchy of vampiredom is turned upside down – with the powerful being the weak, and the weak becoming the greatest amongst them. It’s a night to party.

Tickets were available via Kickstarter, and then through an online shop. There were several options for tickets, including:

Additionally, there were several add-ons you could purchase, including:

Creating and Playing a Character in a Vampire LARP

Saturnalia was a Nordic style LARP, which was very different for many LARPers in our group. Nordic style involves creating a consensual story with others – it’s very rules light, what you see is what you get, and focuses on collaborative storytelling.

Character creation involved the release of token codes, which allowed you access into a website where you could generate your own character. You chose your vampire clan, sect, and then some details that helped establish your story. Were you coming to Saturnalia to let your hair down? To say goodbye? It offered some guidance in crafting a story that you weren’t 100% committed to during the game.

The game required everyone to attend one of three workshops where you learned about basic consent mechanics, how to feed as a vampire, and forging connections that you could call on in-game. They also covered safety and gave an overview of the schedule for the event. You learned more about combat, special skills, and had some practice on getting in character.

Roaming New Orleans as a Vampire

As the night began, you started with your initial ‘coterie.’ This was a group where you had similar things in common – for example, Princes were with Princes, ‘local’ thin-bloods and ghouls were all in one group, werewolves in another, etc. This gave you a group with which you could engage as you continued throughout the night. There were basic in and out of game introductions, and then things were on!

Throughout the night a variety of venues opened their doors to vampires roaming the city. These varied from Cigar bars, to museums, to restaurants and gay bars. Many of these venues had dancers or other skilled artists who were there to keep the experience immersive. One venue even had a snake dancer!

The event also included a 2nd Line – which is a parade that follows a main performer–in this case, a local brass band.. In our instance, it was a funeral procession that turned joyful upon reaching its destination – the BK House ( a filming site for the new Interview with the Vampire Show). Throughout this parade, some people held their arms out and appeared to hover, others raced up to the bystanders who were capturing the moment on their phones and bared their teeth, and others put their arms around a nearby friend and had a good laugh as they cherished the moment.

There were several plots going on at any moment:

The event organizers crafted partnerships with these different venues by use of drink tickets. They purchased a large number of drinks through these cards, which secured value for participants in the form of alcohol, while also giving them unique and private places to hangout. Many of these places included upstairs bars or private rooms. It was at these secondary locations that participants were able to continue their plots: using private rooms for improvised or minimally planned rituals, hold diplomatic meetings for negotiations, or even more intimate affairs as they found love.

As the event continued, participants visited a variety of locations, eventually ending at the BK House for the remainder of the night. Contortionists, sword dancers, and musicians were all present. The house was… *un*alive with activity. Several brawls occurred. And then came the grand finale – one last ceremony to celebrate Saturnalia.

The event was incredibly welcoming for individuals of any walk of life. If you had a massive amount of Vampire the Masquerade experience, you were playing with those who were just learning about the world – and it all worked well together. If you walked up to an ongoing conversation, you were invited in – and it was easy to stay engaged in character.

The event lasted from 5 PM to around 12:30 AM the following morning. As the sun began to emerge, the vampires across New Orleans sought out shelter from the sun… lest they turn to dust.

Overall, an incredible game that left many asking for another run next year!